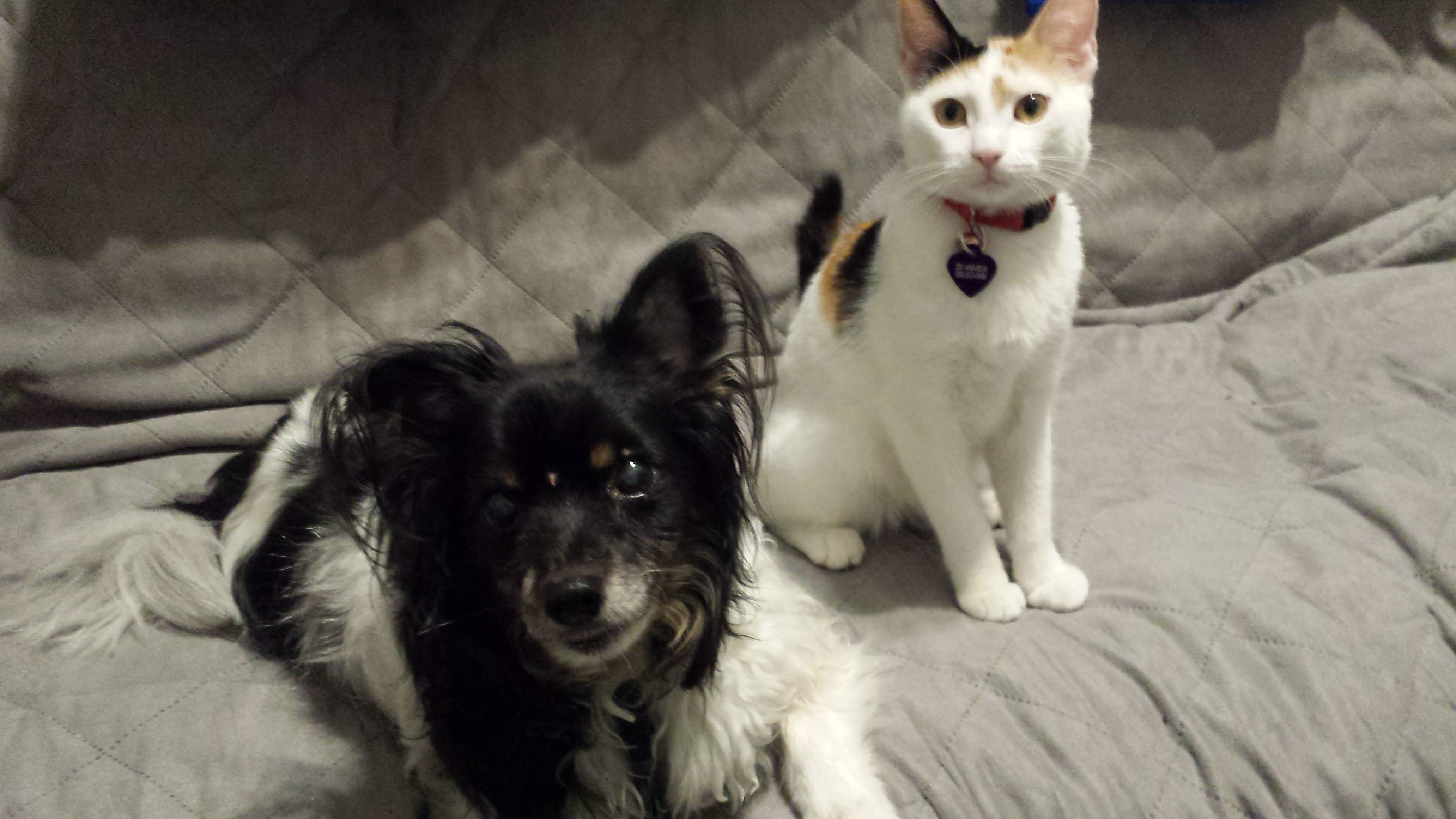 Socialization is the process during which the kitten develops relationships with other living beings in its environment.

As cats develop, there are numerous stimuli (sounds, smells, sights and events) that, when they are unfamiliar, can lead to fear and anxiety. Habituation is the process of getting used to and not reacting to those stimuli by continuous exposure under circumstances that have no untoward consequences.

Localization is the process during which the kitten develops attachment to particular places.

Cats that receive insufficient exposure and contact with people, other animals and new environments during their first two months may develop irreversible fears, leading to timidity or aggression. Expose your kitten to many stimuli (people, places and things), when they can most effectively socialize, localize, and habituate to these stimuli. The first 1 to 3 months of life are the most critical periods in the social development of the cat, but it is important to continue to expose your young and adult cats to new things.

Are cats a social species?

While they are fairly independent and can do well on their own, cats are quite social. Although feline social behavior has not been as extensively studied as for the dog, the domestic cat is much more social than has been traditionally reported. There are many situations where cats live together in groups and interact in a friendly manner. The composition of these groups differs from dog groupings. Usually they consist of mothers, daughters, aunts and grandmothers; female cats that are related. In large colonies, there may be many smaller related groups sharing the same space. Male cats will leave the group, but return for breeding. Males that have been neutered join the group in much the same way as females. Colonies of feral (wild) cats will be found in areas where food is abundant and shared, such as barns, dumpsites or around fishing ports. The cats in the group will allogroom (lick each other) and allomark (rub against each other). They will share the raising of kittens, fostering others from different litters.

Do cats have "personalities"?

Research has shown that it may be possible to classify cat "personalities" similar to what has been done for dogs. One such study identified cats that were shy, timid or fearful and those that were confident. The timid cats took significantly longer to approach persons and be held by them. Another study identified cats that were "shy" and those that were "trusting". That research noted that trusting cats were trusting regardless of where they encountered people, while shy cats were more fearful the further from home they were encountered. Based on these and other studies there are two common personality types: (a) sociable, confident and easygoing; (b) timid, shy and unfriendly. Some other research has also indicated an active aggressive type as well. What influences the development of personality type? Not surprisingly studies have confirmed that not only is personality inherited from the mother, but also that friendliness specifically is, in part, inherited from the father.

How does the mother cat (or queen) teach her kittens?

Cats are very good at observational learning. This occurs when an animal watches a behavior being performed by another. The queen starts to teach her kittens at a young age. From the queen, kittens learn elimination behaviors and predatory behavior. Kittens will begin to spend time in the litter box at about 30 days of age and will learn appropriate litter usage through observation of the queen and certain olfactory (smell) cues. If allowed access to prey, the queen will begin to bring them to her offspring at about 32 - 36 days of age and teach them to hunt.

The kittens will begin to be weaned and eat solid food at the same age. The choice of food is influenced by the queen. Play between kittens is an important part of social development, particularly for those kittens that will be housed with other cats later in life.

What can I do to improve my chances of having a social, non-fearful cat?

Selection: The genetics of an individual cat plays a critical role in how sociable, playful, fearful, excitable, or domineering a kitten will become. The first issue in helping to ensure that a kitten will be friendly and social when it grows up is to choose an appropriate kitten for your family.

Since cats have a variety of personality types, the question is whether these personality types can be determined at the time of selection. As kitten socialization begins to decline at about 7 weeks of age, selection testing may become increasingly more accurate after this age. Therefore assessing older kittens and adult cats may provide more accurate information. The behavior of the parents, especially the father, as well as the behavior of any offspring from previous litters may be of even greater value at predicting adult behavior.

Assessment of young kittens is likely of limited value if the kittens are still progressing through the primary socialization period, and the assessment of the parents may provide just as much information.

Early handling: Kittens that are stimulated and handled from birth are more confident, more social, more exploratory, faster to mature and are better able to handle stress as they develop. Early handling of kittens decreases their approach time to strangers and increases the amount of time that they stayed with them. The more handling the better; but even 15 minutes a day will help to improve later behavior. Regular and frequent handling from birth increases the likelihood that the kitten will relate well to people when placed into a home after weaning at 6 to 9 weeks of age. Therefore, kittens obtained from a breeder or home where they have had frequent contact and interaction with the owners are likely to be more social and less fearful as they develop.

Socialization: The two most important factors in how social a cat becomes with people are its genetic personality, and the amount of socialization it receives during the sensitive period of socialization which is thought to be 3 - 7 weeks of age. Certainly, the greater exposure a kitten has to humans of all ages, other pets and novel situations, the better adjustment that kitten will have. Therefore the best options may be to obtain a kitten from a home where good socialization has already taken place, or to obtain a new kitten prior to 7 weeks of age and ensure immediate socialization.

How can I assist my new kitten's socialization?

Introduce your kitten to many new people and situations as possible. If the kitten is meeting a person or other pet for the first time and remains playful and inquisitive be certain to encourage and reinforce the kitten for its actions, and repeat the exposure regularly with a variety of similar stimuli. If however the kitten is fearful or withdrawn, a more gradual introduction while pairing favored treats and play with each exposure may improve the relationship fairly quickly. Be certain that the stimulus moves slowly so as not to startle the kitten. Strangers may be able to offer treats or stimulate play using a favored chase toy. However, when introducing a kitten to other animals, the stimulus should be well restrained and calm so that the kitten's fear is not enhanced, and it can be motivated to take the treats and food for the owner. There may be a great deal of individual variation, with some cats quickly adapting to new people and other pets, and others requiring a very gradual program of desensitization and counter-conditioning. (See our handout on desensitization and counter-conditioning for more details).

How best should I introduce my new kitten to my home?

Your interaction with your new kitten begins on the ride home. Cats should always be transported in some kind of carrier in the car. By teaching your kitten to ride in a confined location you are providing safety for your cat in future car rides. Upon arriving at home, place the kitten in a small, quiet area with food and a litter box. If the kitten is very tiny, a small litter box with lowered sides may be necessary at first. If possible, duplicate the type of litter material used in the previous home (See our handout on House-training).

The first place you put your new kitten should be inspected for nooks and crannies where a kitten might hide or get stuck. Often in a new environment, a kitten may look for a secluded place to hide. However, all kittens and cats will need to investigate their new surroundings. For a new kitten this is a more manageable task if you limit space available and initially supervise the kitten. When cats do investigate they use a random method of search. After your new kitten has had some quiet time in a restricted location, slowly allow access to other areas of the home.

Kittens are natural explorers and will use their claws to climb up onto anything possible. In the first few weeks, slow access to the home will allow exploration as well as giving you the ability to monitor the kitten's behavior. Monitor for any stimuli, rooms or areas that seem to frighten the cat, and use favored treats and play to encourage further exposure.

Back to Training Tips 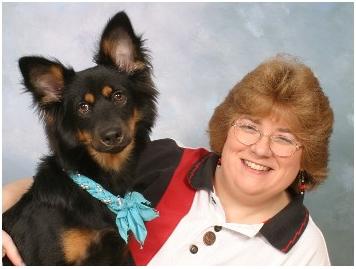 Judy Seils has over 20 years of experience working with dogs and cats in the most stressful of environments, the veterinary clinic. During that time, she taught dog training classes and helped clients with behavior issues. She trained and competed with two of her dogs, Dreamer and Shiloh, in flyball, and coached other teammates in training their dogs. Judy also had fun working with Dreamer and Shiloh in freestyle.

Though currently dogless, Judy is clicker training her calico cat, Ruby who is keeping her humble as they work on such behaviors as sit, beg, give me five, wearing a harness and others. Cats are definitely harder to train than dogs, but also fun to work with.

Judy loves using her knowledge to help other people train their dogs and cats.

Shouldn't your pet have Pawfect Manners? Sign up now!

Shouldn't Your Pet Have Pawfect Manners?

You can have a well-behaved pet, let me show you how.

How to Zoom & Set Up for Class